One of the concepts that new users of wxPerl must understand is the sizer and layout system. The following explanation is taken from the wxWidgets documentation and amended to be wxPerl specific.

Sizer Classes:
Sizers, as represented by the Wx::Sizer class and its descendants in the wxWidgets class hierarchy, are used to define the layout of controls in frames and dialogs in wxWidgets. The system has the ability to create visually appealing dialogs independent of the platform taking into account the differences in size and style of the individual controls.

The Idea Behind Sizers

The layout algorithm used by sizers in wxWidgets is closely related to layout systems in other GUI toolkits, such as Java's AWT, the GTK toolkit or the Qt toolkit. It is based upon the idea of individual subwindows reporting their minimal required size and their ability to get stretched if the size of the parent window has changed. This will most often mean that the programmer does not set the start-up size of a dialog, the dialog will rather be assigned a sizer and this sizer will be queried about the recommended size. This sizer in turn will query its children (which can be normal windows, empty space or other sizers) so that a hierarchy of sizers can be constructed. Note that Wx::Sizer does not derive from Wx::Window and thus does not interfere with tab ordering and requires very few resources compared to a real window on screen.

What makes sizers so well fitted for use in wxWidgets is the fact that every control reports its own minimal size and the algorithm can handle differences in font sizes or different window (dialog item) sizes on different platforms without problems. For example, if the standard font as well as the overall design of Linux/GTK widgets requires more space than on Windows, the initial dialog size will automatically be bigger on Linux/GTK than on Windows.

There are currently five different kinds of sizers available in wxWidgets. Each represents either a certain way to lay out dialog items in a dialog or it fulfills a special task such as wrapping a static box around a dialog item (or another sizer). These sizers will be discussed one by one in the text below.

All sizers are containers, that is, they are used to lay out one dialog or frame item (or several dialog items), which they contain. Such items are sometimes referred to as the children of the sizer. Independent of how the individual sizers lay out their children, all children have certain features in common:

A minimal size: This minimal size is usually identical to the initial size of the controls and may either be set explicitly in the Wx::Size field of the control constructor or may be calculated by wxWidgets, typically by setting the height and/or the width of the item to -1. Note that only some controls can calculate their size (such as a checkbox) whereas others (such as a listbox) don't have any natural width or height and thus require an explicit size. Some controls can calculate their height, but not their width (e.g. a single line text control):

A border: The border is just empty space and is used to separate dialog items in a dialog. This border can either be all around, or at any combination of sides such as only above and below the control. The thickness of this border must be set explicitly, typically 5 points. The following samples show dialogs with only one dialog item (a button) and a border of 0, 5, and 10 pixels around the button:

An alignment: Often, a dialog item is given more space than its minimal size plus its border. Depending on what flags are used for the respective dialog item, the dialog item can be made to fill out the available space entirely, i.e. it will grow to a size larger than the minimal size, or it will be moved to either the centre of the available space or to either side of the space. The following sample shows a listbox and three buttons in a horizontal box sizer; one button is centred, one is aligned at the top, one is aligned at the bottom:

You can hide controls contained in sizers the same way you would hide any control, using the
$wxwindow->Show(0)
method. However, Wx::Sizer also offers a separate method which can tell the sizer not to consider that control in its size calculations. To hide a window using the sizer, call

You must then call

to force an update.

This is useful when hiding parts of the interface, since you can avoid removing the controls from the sizer and having to add them back later.

Wx::BoxSizer can lay out its children either vertically or horizontally, depending on what flag is being used in its constructor. When using a vertical sizer, each child can be centered, aligned to the right or aligned to the left. Correspondingly, when using a horizontal sizer, each child can be centered, aligned at the bottom or aligned at the top. The stretch factor described in the last paragraph is used for the main orientation, i.e. when using a horizontal box sizer, the stretch factor determines how much the child can be stretched horizontally. The following sample shows the same dialog as in the last sample, only the box sizer is a vertical box sizer now:

Wx::StaticBoxSixer is the same as a Wx::BoxSizer, but surrounded by a static box. Here is a horizontal sample:

Wx::GridSizer is a two-dimensional sizer. All children are given the same size, which is the minimal size required by the biggest child, in this case the text control in the left bottom border. Either the number of columns or the number or rows is fixed and the grid sizer will grow in the respectively other orientation if new children are added: 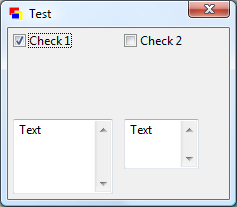 Another two-dimensional sizer derived from Wx::GridSizer. The width of each column and the height of each row are calculated individually according to the minimal requirements from the respectively biggest child. Additionally, columns and rows can be declared to be stretchable if the sizer is assigned a size different from the one it requested. The following sample shows the same dialog as the one above, but using a Wx::FlexGridSizer:

The basic idea behind a Wx::BoxSizer is that windows will most often be laid out in rather simple basic geometry, typically in a row or a column or several hierarchies of either.

As an example, we will construct a dialog that will contain a text field at the top and two buttons at the bottom. This can be seen as a top-hierarchy column with the text at the top and buttons at the bottom and a low-hierarchy row with an OK button to the left and a Cancel button to the right. In many cases (particularly dialogs under Unix and normal frames) the main window will be resizable by the user and this change of size will have to get propagated to its children. In our case, we want the text area to grow with the dialog, whereas the button shall have a fixed size. In addition, there will be a thin border around all controls to make the dialog look nice and - to make matter worse - the buttons shall be centred as the width of the dialog changes.

It is the unique feature of a box sizer, that it can grow in both directions (height and width) but can distribute its growth in the main direction (horizontal for a row) unevenly among its children. In our example case, the vertical sizer is supposed to propagate all its height changes to only the text area, not to the button area. This is determined by the proportion parameter when adding a window (or another sizer) to a sizer. It is interpreted as a weight factor, i.e. it can be zero, indicating that the window may not be resized at all, or above zero. If several windows have a value above zero, the value is interpreted relative to the sum of all weight factors of the sizer, so when adding two windows with a value of 1, they will both get resized equally much and each half as much as the sizer owning them. Then what do we do when a column sizer changes its width? This behaviour is controlled by flags (the second parameter of the Add() function): Zero or no flag indicates that the window will preserve it is original size, wxGROW flag (same as wxEXPAND) forces the window to grow with the sizer, and wxSHAPED flag tells the window to change it is size proportionally, preserving original aspect ratio. When wxGROW flag is not used, the item can be aligned within available space.

all do what they say.

The default alignment is  wxALIGN_LEFT|wxALIGN_TOP.

As mentioned above, any window belonging to a sizer may have a border, and it can be specified which of the four sides may have this border, using the wxTOP, wxLEFT, wxRIGHT and wxBOTTOM constants or wxALL for all directions (and you may also use wxNORTH, wxWEST etc instead). These flags can be used in combination with the alignment flags above as the second parameter of the Add() method using the binary or operator |. The sizer of the border also must be made known, and it is the third parameter in the Add() method. This means, that the entire behaviour of a sizer and its children can be controlled by the three parameters of the Add() method.

use strict;
use warnings;

Other Types of Sizers

Wx::StaticBoxSizer is a sizer derived from Wx::BoxSizer but adds a static box around the sizer. Note that this static box has to be created separately.

Wx::GridBagSizer is a rather special kind of sizer which, unlike the other classes, allows to directly put the elements at the given position in the sizer. Please see its documentation for more details.

The following flags can be passed to these functions: